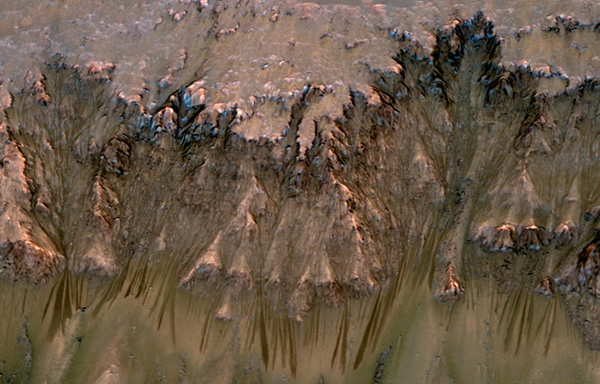 “Oblique View of Warm Season Flows in Newton Crater” by NASA/JPL-Caltech/Univ. of Arizona.

Wait, there’s liquid water on Mars! This past month NASA confirmed evidence that liquid water flows on Mars. NASA confirmed the evidence of liquid water on recurring slope lineae (RSL). The hydrated salts seem to be in abundance on Mars and would lower the freezing point of liquid water, just as salt on roads here on Earth causes ice and snow to melt more rapidly. Scientists say it’s likely a shallow subsurface flow, with enough water wicking to the surface to explain the darkening. Here’s a short NASA video that explains the findings.

I teach Chemistry to 11th graders and Integrated Science to 9th graders and have been using the Big History Project as a springboard of ideas to better instruct my students. However, I do teach the Big History Project as a capstone Science elective to 11th and 12th graders to provide a more personal connection between the students, their world, and the science facts presented to them. As a capstone elective my students come into the course interested in the natural world around them. Below is a quick lesson plan that starts with the discovery of water on Mars, examines the importance of water through the BHP narrative, and ends with a discussion of how life emerged on earth.

As my class entered Unit 5 and started the discussion on threshold 5, I posited the following statements.

I had the students look over the content learned thus far and make connections between water and the narrative. As my students were looking at all of the places where water came up in the Big History story, we discussed water’s importance in each instance. Ultimately our conversation reached the goldilocks conditions on Earth that allowed for the appearance of life. At the center of the story stood water as the underlining molecule.

I passed out the article titled Life’s Beginnings, studying how life bloomed on Earth—and might emerge elsewhere. As we read over the article, I instructed the students keep water in mind, and to think about how water could be used to tackle the issues from the different fields of science. My students were able to draw connections between the earlier units, and saw that water carried the conversation into Unit 5 to the ultimate unknown in science, how did life emerge on Earth!

I would strongly encourage discussing the progression with your students. The Big History narrative could break this ultimate unknown question in science, and who knows if our collective learning of great thinkers is what it takes!

Below are some resources on the discovery of water on Mars to share with your students.

Big History Project: A Story for Everyone